This is Sundae. I adopted him from Celebrity Pets Rescue exactly one month ago on 12 March 2016. 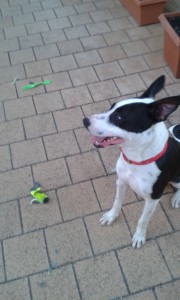 For as long as I could remember, I have loved dogs, long before I even knew what a budgerigar was. When I was a little kid, not yet old enough to go to kindergarten, my parents bought me a basset hound plushie which I still have today. They also bought me a small dog plushie which used to have whiskers and a bell on its ribbon collar, but as a child I used to pull the whiskers and I lost the bell a very long time ago. I had “Lady and the Tramp” on VHS tape. I really loved that movie. Even after discovering budgies, I still loved dogs as much as ever. I loved watching movies about dogs, I’m a huge fan of “Inspector Rex” (bought it all on DVD), and got teary-eyed after watching “Marley and Me” and “Red Dog“.

My parents didn’t allow me to have a real dog, I guess its because a dog was a luxury my parents could not afford at the time. So it was my dream to get a dog after I graduate from school, get a well-paying job, and my own home. I actually got my own home three years ago, but I didn’t feel like I could afford a dog because most of the time I was living from paycheck to paycheck. Eventually I got better at managing my budget, and then earlier this year I put some serious thought into getting my first dog with a preference for adopting from the RSPCA, rescue organisation or shelter. These organisations are always appealing for people to adopt, so I thought the process would be quick and easy. I was wrong.

In January I had been going back and forth between I-work-full-time-and-money-is-tight and I-really-want-a-dog. Then in early February I saw a Facebook post advertising an event for “National Pet Adoption Day” where various animal rescue organisations visit PetStock stores with a few of the cats and dogs available for adoption. That was the beginning of my serious search for a canine jogging buddy.

I went to the event at the Balcatta PetStock store. I briefly spoke with one of the volunteers and asked them what they would recommend for a first-time dog owner, but was a little disappointed that all they could offer was a brochure and told me to call the mobile contact number for more information. I tried to call the number several times, but was never able to get through to someone, and never received a call back or response to text messages.

The following week I visited the RSPCA in Malaga. There was only one staffer there, and she seemed busy with other people. I did speak with her for a moment, and she advised me to go to the kennels to have a look and see if any of the dogs interested me. She mentioned that the dogs tended to bark a lot because they were not used to being in the kennels. I went to take a look, but because the lone staffer seemed too busy that day, I left without pursuing anything further.

Next I went to visit the Dogs Refuge Home in Shenton Park. I had looked at their website previously and there were a few dogs that I liked. When I arrived around noon, there were a lot of cars parked on the verge. It was a Saturday and the Dogs Refuge Home was full of prospective adopters and volunteers. I wandered around and had a look at the dogs, and filled in a questionnaire about my lifestyle and preferences so they can review whether the dogs I liked would suit. I answered the questionnaire honestly, but because I work full time, they told me that the dogs I listed were unsuitable because they preferred someone who would be at home more. I asked them about another dog, a kelpie cross named Buddy. The volunteer said they would check with the trainer and see if Buddy would suit me. After a long wait, the volunteer came back to me saying that Buddy would be suitable for me, but the bad news is that Buddy was adopted by someone else an hour earlier. The volunteer suggested that I try visiting next week because they get 20 to 30 dogs coming in and out of the refuge each week (I found this statistic surprising). They also suggested visiting the PetRescue website.

I returned to the RSPCA and Dogs Refuge Home several times, and also contacted several other rescue organisations. Most of them said “no” because I work full time I would be leaving the dog alone at home for 10 hours, and/or because I had a small back yard. A month of scouring the PetRescue website, visiting shelters, calling and sending e-mails, I was getting really frustrated at how hard this was and was on the verge of giving up. After another visit to the RSPCA and Dogs Refuge Home ending in disappointment, I posted a rant on Facebook about the difficulties of finding a dog to adopt, and felt like throwing in the towel.

I made a last ditch attempt to find my future fur baby by sending an e-mail to a rescue organisation that I had not yet approached: Celebrity Pets Rescue. In my e-mail I explained my predicament and asked if they had any dogs that would suit my circumstances. I received an encouraging response with pictures of two German Shepherd/Kelpie crosses that were potential matches. They advised me to visit them in Malaga on Saturday.

Come Saturday, I visited the Celebrity Pets Rescue in Malaga. The ladies there discussed some of the dogs they had, and in the end they suggested Sundae and asked if I wanted to meet him. I said yes, so they brought Sundae out to the courtyard. Sundae seemed ecstatic to be out of the kennel and proceeded to wander around and sniff everything. They let me take Sundae for a short walk and spend some time with him. He was such an energetic and friendly dog, I decided he was the one!

Apparently Sundae had been in the kennels since October last year, so roughly 5 or 6 months, which I found surprising because he was such a gorgeous and friendly dog. I filled in the paperwork for adoption, the ladies were really helpful in answering my questions about dog ownership. My house was not ready for a dog, I had no dog food, dog bowls, leads, collars, beds, etc. The ladies at Celebrity Pets Rescue recommended a nearby pet store that supports the rescue organisation, so while I went there to buy a few things, they gave Sundae a wash. When I returned to take Sundae home, he looked even more gorgeous.

A week later, the microchip details were transferred to my name, and Sundae was officially mine :) 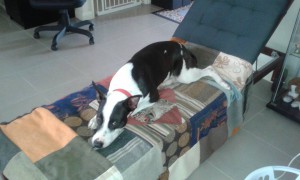