Back in the year 2007, the singing voice synthesiser software Hatsune Miku was released, the first in the “Character Vocal Series” or what I refer to as Vocaloids. Eight years on, it feels like Hatsune Miku and vocaloids in general have enjoyed astronomically enduring popularity amongst the anime/manga fandom. I initially dismissed it as a silly gimmick that could never sound as good as a real human singer.

I ignored Vocaloids and their music, this was back when videos tended to require a lot of buffering to play, so I didn’t waste my time on what I deemed to be a poor artificial imitation of singing. But Hatsune Miku was just SO popular, I couldn’t avoid hearing about it. The anime-related websites that I frequented would often post articles relating to Vocaloids, and figurine companies made several adorable Vocaloid character figurines. There have even been ‘live’ concerts and an appearance on the Late Show with David Letterman.

Hatsune Miku is marketed as being a 16-year old girl with a cutesy voice. That didn’t really appeal to me, and initial examples of her singing didn’t sound good to me. The second in Character Vocal Series, Kagamine Rin and Len (age 14), didn’t appear to me either. But when the third character was announced, Megurine Luka, I was mildly interested as she had a more mature persona (age 20) and was marketed as being capable of singing in Japanese and English. In 2009, when one of the sites I frequent for anime news, Sankaku Complex, made a post about “Double Lariat” one of Megurine Luka’s hit songs (song isn’t NSFW but website is), I checked it out and enjoyed Luka’s slightly husky voice, which was not as screechy as Miku, and I liked the interesting lyrics and melody.

This prompted me to buy a Megurine Luka prize figurine and Nendoroid Petit at Wai-con. I also pre-ordered/purchased the Megurine Luka figma and a scale figurine based on this lovely illustration by Tony Taka: 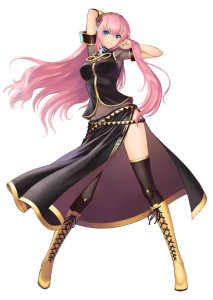 I used to visit Moetron regularly for news on upcoming anime series, and several years ago they also posted many articles about Vocaloids and their weekly song rankings (nowadays, they don’t post about Vocaloids as much). They also released English-subtitled copies of some popular Vocaloid music videos. I downloaded a few of them, and amongst my favourites were:

Hatsune Miku – World Is Mine
I heard that a figurine based on this song was released, so I was curious what sort of song would be popular enough to have a figurine made for it. While I found Miku’s high-pitched screeching voice a little annoying on the ears, the lyrics of the song was amusing, and the tune catchy.

Megurine Luka – Dance In The Dark
Maybe it’s because I’m biased towards Luka, but I enjoyed the tune and dark theme of this song.

Megurine Luka – Around The World
Another song that I liked for its catchy melody.

Hatsune Miku & Megurine Luka – World’s End Dancehall
This is one of my favourite vocaloid songs because it’s so catchy and because of the cool music video.

The music I normally listen to tends to fall in one of these two categories: music played on Mix 94.5 and anime-related songs. For the latter, I liked to listen to song medleys (kumikyoku) that combined several songs into a non-stop track. There were a few that contained remixes of popular vocaloid music, but given the non-stop nature of the tracks, sometimes I didn’t even realise that some of the tunes were originally vocaloid music. Now that I have a much better Internet connection, I’ve started to seek out the original music videos for the vocaloid songs that feature in my favourite medleys. I have also been checking out some of the more popular vocaloid songs. Some of my favourites:

Hatsune Miku – Senbonzakura
I was curious about this song because it had also inspired a figurine. My goodness! The first time I heard/watched this, I was hooked and replayed the video over and over and over again! I really love the song and the visuals in the music video. Also, Miku sounds good, not screechy or too high pitched. There are also a lot of nice covers of this song.

Kagamine Rin – Meltdown
This song featured in a lot of the medleys that I liked, but it wasn’t until recently that I knew what the song was called or ‘who’ sang it. I like the melody of this song, and Kagamine Rin’s voice sounds good too.

Hatsune Miku & Gumi – Matryoshka
When searching for popular vocaloid songs, people often cite “Matryoshka” as a favourite, but the first time I watched the music video for the song, I didn’t like it. The song sounded “noisy” and “annoying” to me, and the visuals were kind of creepy. But after listening to it a few times, it started to grow on me, and now I quite like the song.

Hatsune Miku – Rolling Girl
This song also appeared in many of the medleys I listened to. I like the lyrics and melody.

Hatsune Miku – The Disappearance of Hatsune Miku
Unlike the other Hatsune Miku songs that I like, in this one Miku sounds a lot more artificial or robotic, but given the lyrics and meaning of the song, it would be intentional and is very fitting. It’s another song that appears in several my favourite medleys, but I never knew its origins until recently. At times the lyrics are ‘sung’ so fast, I can’t imagine any human singer being capable to doing it.

Hatsune Miku – Two-Faced Lovers
Miku is sounding very high-pitched, but I like the melody. This song was created by wowaka who also created “World’s End Dancehall” and “Rolling Girl”.

The above songs are my favourite or ‘most notable to me’ vocaloid songs, but there are several more out there that I have added to my Youtube or Nico Video favourites list.

I’ve been reading up on the background, inspiration and meaning of these songs, but most of them are described as being “vague and open to interpretation”. There are a few songs where I like them for their meaning and lyrics, but in general I like these songs for their melody. Would the songs sound better if they had been sung by human singers? I haven’t listened to many human covers of vocaloid music, but it varies depending on the singer. Some are quite good and come close to sounding better than the vocaloid, but some just don’t work and sound worse. It could also be bias due to being used to the sound of the vocaloid’s singing.

What I have also noticed is that like any other instrument, the skill of the user is the greatest factor in determining a good song. Just as mankind has progressively developed machines that can do tasks faster and better than humans, vocaloids have also been developed to sound better and more natural (as long as you know how to tweak the software to do that). We are probably still years away from a singing voice synthesiser that can be indistinguishable from a human singing voice, but I don’t think that is the point of vocaloids, at least not the character series of vocaloids. I don’t see them as replacements for human singers, rather they are more like a new instrument used in the creation of music. While I am very late to the vocaloid bandwagon, I think some songs are just made for vocaloids, and would not have the same meaning or impact if it had been sung by a human singer.

With that said, here’s an excellent human cover of “Senbonzakura” by Wagakki Band.