The Inuyasha anime series ended in September 2004, although the manga series would continue on for a few more years. I was no longer following an ongoing anime series. Instead, with my new found access to relatively fast Internet at university, I spent much time downloading anime series that had already completed their run on TV, too many series to remember. Meanwhile, with the Inuyasha manga series continuing on, my interest in Inuyasha continued, which lead me to discover that the time slot that Inuyasha used to air in had inevitably been replaced with a new anime series. And that series was: Yakitate!! Japan

An anime series about bread?! Not only was I intrigued by the unusual premise, many others were commenting that this series was hilariously funny and entertaining. This I had to see…

Initially I downloaded the series via torrents at home on my excruciatingly slow dial-up Internet, but was later able to find direct downloads that I could download while at university. I was not disappointed. This series is indeed highly entertaining, interesting and funny. I found the second ending theme especially amusing:

Better believe in yourself!

Yakitate!! Japan follows the adventures of a boy who dreams of reaching his goal of creating the ultimate bread that is representative of Japan. The entertainment value of this series is more than just the unusual choice of subject matter. The series is heavy on puns and over-the-top and downright insane reactions that people have to bread, with a sprinkling of interesting information about bread and food in general.

I also downloaded the original manga series, which in my opinion was funnier than the anime adaptation. I enjoyed the series so much that I purchased the entire manga series, and with the news that the anime series has been licensed for release in English, I’ll be sure to buy that too. As much as I enjoyed Yakitate!! Japan, it didn’t inspire the same fervent obsession that I had with Neon Genesis Evangelion or Inuyasha. There was no fan art or obsessive scouring of the Internet for titbits of information. Still, I would highly recommend this series to anyone who likes a bit of goofy fun.

With a total of 69 episodes, Yakitate!! Japan aired on TV in Japan from 12 October 2004 to 14 March 2006. I downloaded every single episode as it was released by fansubbers. While Yakitate!! Japan continued its run, I continued to download completed series which were highly recommended by others, but I also began to explore fresh new series, enter the year 2005… 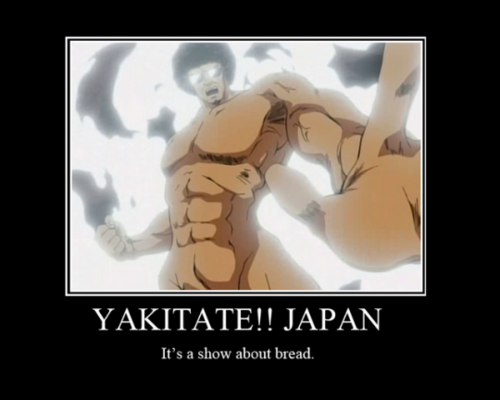