We take it for granted that if we want to watch a TV show, we can simply search it up on the Internet and within an hour, sometimes within minutes, we would have found and downloaded what we wanted to watch (with questionable legality). A decade ago, things were not so easy. First of all it wasn’t easy finding what you wanted, and secondly it took a very, very, very, VERY long time to download video files.

Today I am re-visiting the year 2003 (to 2004), and it is all about Inuyasha. I was crazy for Inuyasha (the series, not the character, Sesshoumaru and Kikyou were my favourite characters).

During my high school years, I was well and truly hooked on manga (perhaps a topic for another day) with the works of Rumiko Takahashi my favourites. Back then, Inuyasha was Rumiko Takahashi’s latest work. During my search for anime related videos, I came across several Inuyasha anime music videos. There was one Inuyasha AMV that stood out to me because of its relatively high quality (for that era) and excellently executed timing. Plus it showed many familiar scenes that I had seen in the manga. This prompted me to seek out more than just anime music videos that featured snippets of footage. I wanted to see whole episodes.

I don’t remember if this started in late 2003 or early 2004, I just can’t remember when, but one day, I discovered BitTorrent. Initially I was baffled at how BitTorrent worked. I found websites that seemingly had treasure troves of full anime episodes, and oh my goodness! The video files were only a few kilobytes large?! But I soon learned that I could not play .torrent file, and that I needed to use a BitTorrent client, but given how slow dial-up Internet was, I was tempted to give up. Eventually with much time and patience, I finally downloaded one episode of Inuyasha. It took several days to complete the download, and we’re talking file sizes of on average 180MB.

Again, I don’t remember which episode it was, but I do remember that the opening theme was “Grip!”…

…and the ending theme was “Itazurana Kiss”…

…which according to Wikipedia, would mean that the very first episode of Inuyasha that I downloaded all those years ago would have been one of episodes 109 to 127. Although it took days, sometimes a week and a bit, to download just one episode, I needed more. I would try to download the latest episode whenever I could, but given how long it took to download via dial-up Internet, I ended up missing a few episodes here and there. Although I already knew what would happen in the series because I had been following the source manga, I eagerly awaited the release of each episode. I had also downloaded all the movies, except the first one, and using dial-up Internet to download a 3GB video file… it was the ultimate test of patience lasting weeks.

During those years, I also attempted to make my own anime music videos primarily using footage from Inuyasha. All of the AMVs I made, I now consider highly embarrassing and I would never actively show anyone my poor attempts at video editing. My horribly unoriginal and unprofessional work from a decade ago can still be found online if anyone can be bothered to search for them.

Something that I sucked slightly less at was fan art. Back then I was proud to show off my work, but now I feel embarassed at what an amateur I am. After locating a folder of my old drawings, this is the only one I’m least embarrassed to show: my favourite character, Kikyou 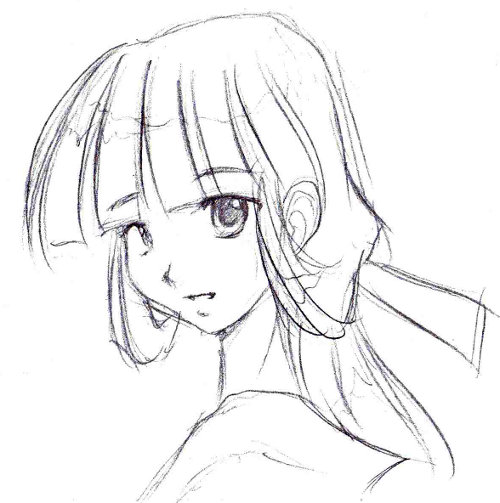 Inuyasha and its fandom had a great impact on my life, I was obsessed with it, consumed by it. But as a large chunk of that impact was the result of the Inuyasha manga, rather than the anime adaptation, I won’t go into too much detail now (again, this is probably best left for a topic of another blog post). When the anime was released on DVD, I had initially aimed to collect all the boxsets, but I only ended up buying the first few, which to this day I have not watched. I much prefer the Inuyasha manga over the anime adaptation.

To finish this post off, here is the ending theme for the first episode: My Will

The same song was also used for the ending theme of the final episode:

However, it wasn’t really the end of the story. Five years later, another 26 episodes of Inuyasha would be released, which I will discuss further when I reach the year 2009 in my series of anime history blog posts. With the transition from high school in 2003 to my first year of university in 2004, came the joyous freedom of fast Internet at university, and the discovery of direct download websites offering a huge library of anime series. My anime world was about to get much, much bigger.